Once upon a time in a land faraway, a storyteller named Meliss Bunce said to me, “I see you telling stories of American women who are significant, but not necessarily famous.”  Hmmmm…..
The first piece I developed was the story of Libby Beaman, the first American, the first white woman to set foot in Alaska.  I had stumbled upon her journal from that time that had been published by her granddaughter, Betty John.  I read the journal and was completely captivated by this woman. 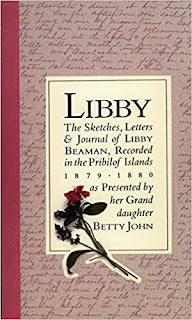 Libby was a free spirited, daring young woman confined by the conventions the Victorian era. She managed to break free of those conventions so that she could use the brains and the talent that were bestowed by her Creator.  It was that daring that allowed her to choose her husband to be and then make that union possible.  It is, indeed, a love story against the backdrop of life in government service during and after the Civil War.

Not long after I had developed this piece, I purchased a biography of Elizabeth Blackwell, the first lady doctor, which held a different appeal than Libby’s.  Her story was inspiring. But then I got busy, really busy, being a single mother and starting over in a land far from home.

Healing story became my focus, and I loved that stories could be a vehicle for it.  It was the subject of my Master’s Thesis, and enriched my work as an addiction counselor. The publication of Distilling Hope: 12 Stories to Distill the 12 Steps, was the culmination of that work, and was immensely satisfying, taking me to the NSN Story Summit to present a workshop.

At the 2019 Summit, Charlotte Blake Alston gave a truly inspiring keynote about the stories that need to be told right now.  Women’s rights were under assault. Immigration had become politically charged.  Suddenly I realized that Elizabeth Blackwell’s story was very timely. Not only did she live when women were fighting for the right to vote, she was an immigrant.  Add to that the disadvantage of becoming disabled.  A trifecta of issues in one woman’s story.  Charlotte’s keynote, and the conversation that followed it, watered that seed Melissa had planted over 20 years ago. It was time to tell Elizabeth’s story. 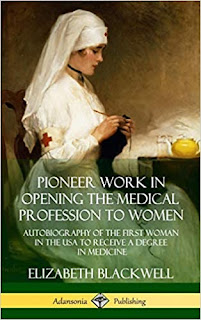 The more I get to know this woman, the more I love her. She saw her path to become a doctor as a spiritual journey; doing what she believed her Creator needed and wanted her to do. Elizabeth faced challenge after challenge, persevering despite the odds, trusting her faith. She prevailed.

As I work to tell Elizabeth’s story, I am reminded of my dear friend Melissa, the seed she planted, her encouragement…and I smile.

Posted by The Power of Perseverance with Beth Ohlsson at 5:59 AM